Today should be a glorious day – the first expansion to the new Adeptus Titanicus has arrived! Titandeath promises to add lots to the game as well as bring new background lore to light, so we must ask ourselves the deep moral question… Is it any good?

Weighing in at 97 printed pages (they use the endpaper at the back), it is undeniably a nice looking hardback costing just £22, reasonable enough for Games Workshop publications.

Titandeath is all about the massive battles that took place between Titans in the Beta-Garmon system. Different systems of the star cluster in which this takes place are covered over 8 pages (2 of which are a map of the cluster), as well as the effects of the Ruinstorm on the area. A full timeline breaks this down over another four pages.

And that is all the background lore you are really going to get in this book.

The next 42 pages form the biggest section of Titandeath, introducing a smidgen of background and all the rules for eight Titan Legions (four Loyalist, four Traitor). This is certainly what we have been waiting for, and each Legio has a paragraph of background (yay!), and specific traits and stratagems. These will be familiar, as they are presented in the same way as the legios of the main rulebook.

The Legions covered are the Warp Runners, Nova Guard, Firebrands, and Solaria for the Loyalists, and the Death’s Heads (their inclusion was inevitable), God Breakers, Tiger Eyes, and Death Stalkers for the Traitors.

This is good, as it now gives us some proper rules for our Legions… however, it does occur to me that there is no real ‘default’ Legion, in the way Codex marine chapters function, meaning if you have tackled Titans not in this book or the rulebook (such as my Legio Xestobiax) in the very least you will be waiting a bit longer for another expansion.

After the Legions come the Maniples, and these at least can be used by anyone. The Corsair Battleline Maniple pictured here has up to five Reavers (must get painting!) that can do some serious sidestepping manoeuvres that, combined with the agility of a Reaver, might get you out of trouble and hitting your enemy just where he does not want to be hit. 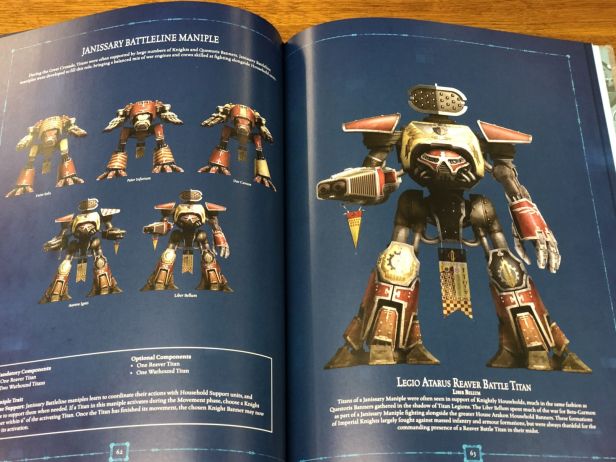 The Janissary Battleline Maniple, on the other hand, has up to two Reavers leading up to three Warhounds, which allows a Knight Banner to be activated alongside it.  There are two more Maniples in this book – the all-Warhound Lupercal Light Maniple has been previewed on the Warhammer Community site, while the Regia Battleline Maniple marries two Warlords with up to three Warhounds. While the two Warlords are close, they can share successful orders, while the Warhounds can merge their shields with the Warlords (representing a king and queen with their courtiers).

There are six scenarios in Titandeath and they… are okay.

My problem here is that a scattergun approach has been taken, highlighting six battles involving various legions. Fair enough – but these are not really supposed to be played as ‘historical’ battles. Rather, they are ‘standard’ battles you might like to try at your club night, with whatever forces you have at hand. There is no story here, no narrative.

Yes, this works and yes, Adeptus Titanicus has a need for more scenarios. However, this is a book supposedly about Titandeath, and I just do not get the feeling that it is really much more than a rules supplement dressed up with a bit of lore.

This is something I will be coming back to… 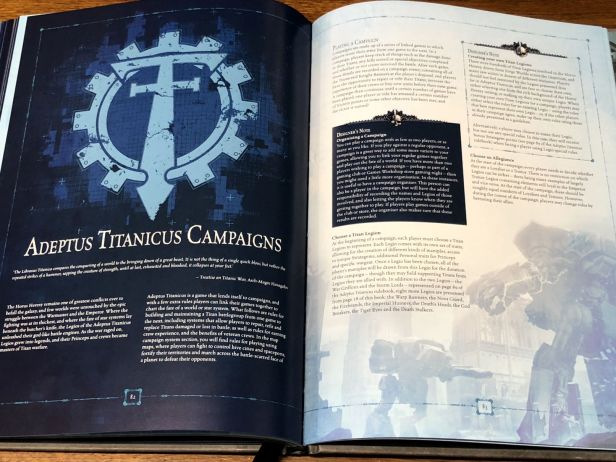 Rules for full-blown campaigns are next and, unlike typical Warhammer 40,000 games, I have a feeling these will actually get used. Campaigns in the original Adeptus Titanicus really were a Thing, and I think it is the nature of Titans that make this desirable – it is by no means uncommon for people to give their Titan models specific names, and they naturally want to know what happens to their creations over the course of a war, in a way you just cannot get with individual Space Marines.

At the end of the book, we get a little bit on the role of Knights at Beta-Garmon… but if you are a real fan of Knights in Adeptus Titanicus, you are not going to be best pleased. The table shown above gives a listing of the houses involved and, along with a similar table for Traitor houses, that is your lot.

This does ring a little bell in my head that chimes ‘page-filler’. That 97 page total for the book is a bit of a telltale – I suspect the original manuscript came up a bit longer than intended or, possibly, a bit short (perhaps this book was supposed to be 128 pages?).

We finally round off the book with a couple of pages covering hostile battlefields – table-wide effects such as unnatural darkness of toxic clouds.

If you want to flesh out your games of Adeptus Titanicus with more rules, this book does just that very well, and for only £22. You will have (at least some) of your legions represented, more maniples are always fun, and there is plenty of mileage to be had from the campaign rules.

But, oh, it is a missed chance. It could have been the start of really getting into the background lore of this side of the Heresy, of exploring just what it is like when hundreds of these massive God Machines walk against one another, of worlds breaking as they fight across continents. All of that is given the merest attention.

A rules expansion for £22 is fine. However, Adeptus Titanicus has never had an issue with higher price points, and a book twice this size would not have cost twice as much to produce – but I think fans of the game would have paid twice as much, especially if they could have received a finer look at the background behind the war on Beta-Garmon and a set of linked narrative-driven scenarios (I might be alone on the latter).

What worries me is that Age of Sigmar has gone the same way and, thus far, Warhammer 40,000 has shown no signs of more depth in its background as it relates to actual games – I fear this is a trend GW is now heading in to cater to gamers for whom the actual playing of the game trumps almost everything else (that sounds really weird to say!). The trouble is, that is not the foundation Warhammer games have been built upon. The background has always been at least as important as the rules…

So, I think I can now render judgement: Good book, could have been so much more.